Order early to avoid RM strikes on 9th, 11th & 14th Dec
Wow! Get 4 Standard Cards for £9.99!
Get bonus credit when you purchase Prepay

Happy... Divorce! How Many Marriages in the UK End in Divorce?

We know that breaking up is hard to do, even if you’re not a fan of Neil Sedaka. Let’s face it, divorce is never part of anyone’s plan when they get married.

But sometimes relationships don’t work out, and whether it’s straightforward or stressful, angry or amicable, divorce is happening, all around the world, every day - so we thought we’d delve a little deeper into the statistics around divorce in the UK.

Time of the Essence? Here's the Facts in a Nutshell...

How Many Brits Consider Calling Their Marriage Quits?

Feeling depressed yet? Yeah, us too. In June 2021, we surveyed 2,002 UK adults to find out a little more about people’s attitudes to their current relationships, and how divorce might have affected their future attitude towards marriage.

Here’s what we found: 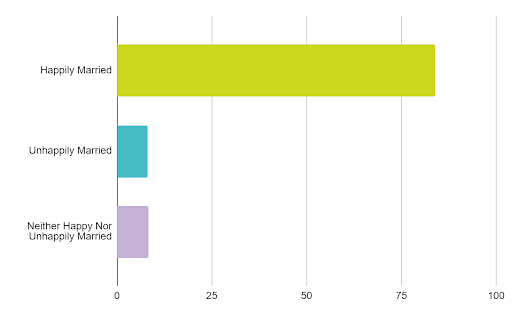 Proportion of married UK adults who feel their marriage is happy, unhappy or neither happy nor unhappy

Our survey found that of all UK adults who are currently married...

But of those of us who say our marriages aren’t happy - what exactly do we plan on doing about it? 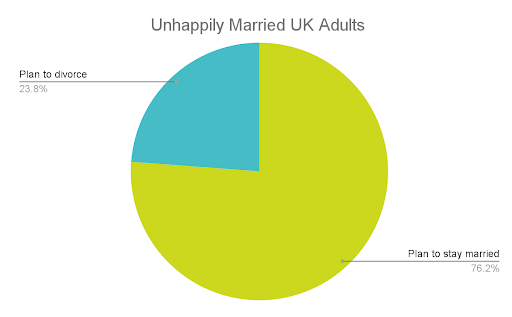 As you can see from the graph:

Almost 13% of respondents in our survey were divorced, and unsurprisingly, the younger we are, the less likely we are to be divorced.

But from our mid-thirties onwards, there’s a big jump in the percentage of people who are divorced -  from 5.7% before the age of 35 to 10.9% after it - and that number almost doubles again with the over 55s!

In fact, people over 45 are three and a half times more likely to be divorced than those under 45.

Divorce Rates Around the UK

The number of respondents who are divorced varies greatly in different areas of the UK. Interestingly, Wales has the highest percentage, with almost one in five (18%) of all Welsh respondents answering that they are divorced.

The North West of England saw the second highest number of divorcees, with 16% of people answering that they were divorced.

Scotland has the lowest number of divorcees, with only one in ten respondents answering that they were divorced, followed closely by Yorkshire and the Humber, where only 8% of people are divorced.

On a city level, Leeds had the fewest number of divorcees - with only 6% of respondents having been through divorce proceedings. This was followed by Edinburgh and Plymouth, which also had very low numbers of divorcees at 7%.

And the city with a seriously high number of divorcees? Manchester, where 18% of all respondents said that they were divorced! Do any of these surprise you?

Despite all this doom and gloom making it look like the odds are very much against us married folk - we’re still romantics at heart! A third of all survey respondents said that they were happily married, and that number jumps to almost half (48%) of all over 55s.

We've not given up on the concept of marriage just yet! A quarter of all respondents said that they had never been married but would like to be.

And of the divorcees who responded to our survey, 42% said that they would happily marry again despite having been divorced - hurray, there's still hope!

Half of All Marriages?

There’s a widely-quoted statistic that says half of all marriages will end in divorce, but in the UK at least, the most recently published numbers suggest otherwise!
According to the Office for National Statistics:

It's unsurprising that very few couples get divorced during the first few ‘honeymoon years’ of a marriage - but things can start to go downhill after a decade or so!

In 2019, the average length of time that a couple would stay together before getting divorced was 12.3 years (for opposite sex couples).

If you are going to file for divorce, you are most likely to do so on ‘Divorce Day’.

Legal firms see a huge spike in divorce applications in the New Year, which has led to the first working Monday in January being dubbed ‘Divorce Day’. A combination of festive stress and the desire for a 'new year, new me' are what’s thought to have tipped couples over the edge and made this day the most popular for people filing for divorce!

Start of Something New

Nobody goes into a marriage thinking that they’re going to get divorced, so when that time comes, we sometimes need a bit of help to point us in the right direction - and always, our good old friend the internet is here to help!
Worldwide monthly searches linked to divorce give some pretty high numbers, with thousands of people using search engines to try to figure out what a divorce entails. We’re also rather keen to know just how much a divorce costs…
Average monthly search volumes obtained from the tool Keyword Finder
There are signs that, as much as possible, we want to make the best of a bad situation. Thousands of searches are conducted every month around having happy or amicable divorces:

Divorce is not just about selling houses and deciding who gets custody of the house plants. Search data also shows that we’re becoming more and more empowered by divorce, with people searching for ways to use it as a celebration and fresh start.

The popularity of divorce parties seems to have rocketed in the last couple of years, with search volume almost doubling in January 2019 from the previous year.

We’re also very happy to congratulate our friends on their new starts: searches for ‘divorce cards’ have almost quadrupled since 2015!

There’s certainly been a movement of empowerment these days when it comes to ending our relationships, and there’s no bigger platform to proclaim your freedom than Instagram.

#divorce has been tagged a staggering 1.6 million times on Instagram posts, with #divorceparty gaining 52,200 tags - and counting.

Both #happydivorceday and #divorceday have been tagged more than 1000 times…

And for those slightly, erm, less amicable breakups, #goodriddance appears more than 147,000 times. We get it. We’ve all been there once or twice!

And what better to accompany a divorce than some crank-up-the-volume-and-belt-it-out break up tunes?

Whether we want to reflect on a lost relationship or celebrate our new found freedom, we’re streaming millions of tunes to match our mood.

For example, ‘D-I-V-O-R-C-E’ by Tammy Wynette has been streamed more than nine million times on Spotify -  but that’s nothing compared to some of the other big players in the breakup tunes game.

But the top break-up song award obviously goes to Adele’s ‘Someone Like You’, which has been streamed more than a billion times. Now that's a lot of break ups!

So, whether you’re thinking of getting a divorce yourself, congratulating someone on their lucky escape or perhaps just wanting to thank your partner for not divorcing you (yet) - why not browse our collection of Divorce Cards today!