Dating Statistics: Where Do Brits Most Want to Meet Their Future Partners in 2021?

Dating. For some of us, it’s a walk in the park! For others, a one-on-one making small talk with someone we've just met really is our worst nightmare. But just how many people in the UK are on the hunt for a romantic partner? And where exactly are us Brits going to meet our potential love interests?

To find out, we conducted a survey of UK adults and had a nosey into online searches around dating in order to get all of the most up-to-date facts and figures on the world of romance in 2021...

Dating Statistics in a Nutshell

Our research found that:

Where do Brits Most Want to Meet Prospective Romantic Partners?

To find out where us Brits most want to meet our potential love interests, we conducted a survey of 2,000 people using the market research tool Censuswide in September 2021. We asked:

‘Where, if anywhere, do you prefer to meet prospective romantic partners? (Tick up to 3)’ answer options:

As you can see from the graph:

From the results of our survey we also found out that:

The figures for how many women/men prefer online dating methods were obtained through adding the percentages of each gender’s responses from the ‘online using dating apps’ and ‘online using social media platforms’ categories. This is based on responses and not respondents, since respondents to the survey could choose more than one answer.

How Does Gender Affect How we Want to Meet our Future Love Interests?

Does gender play a part in how we wish to meet potential future partners? We all know that men are fom Mars and women are from Venus, but perhaps we’re more alike than we think! To find out, we analysed men and women’s responses to our survey and found that: 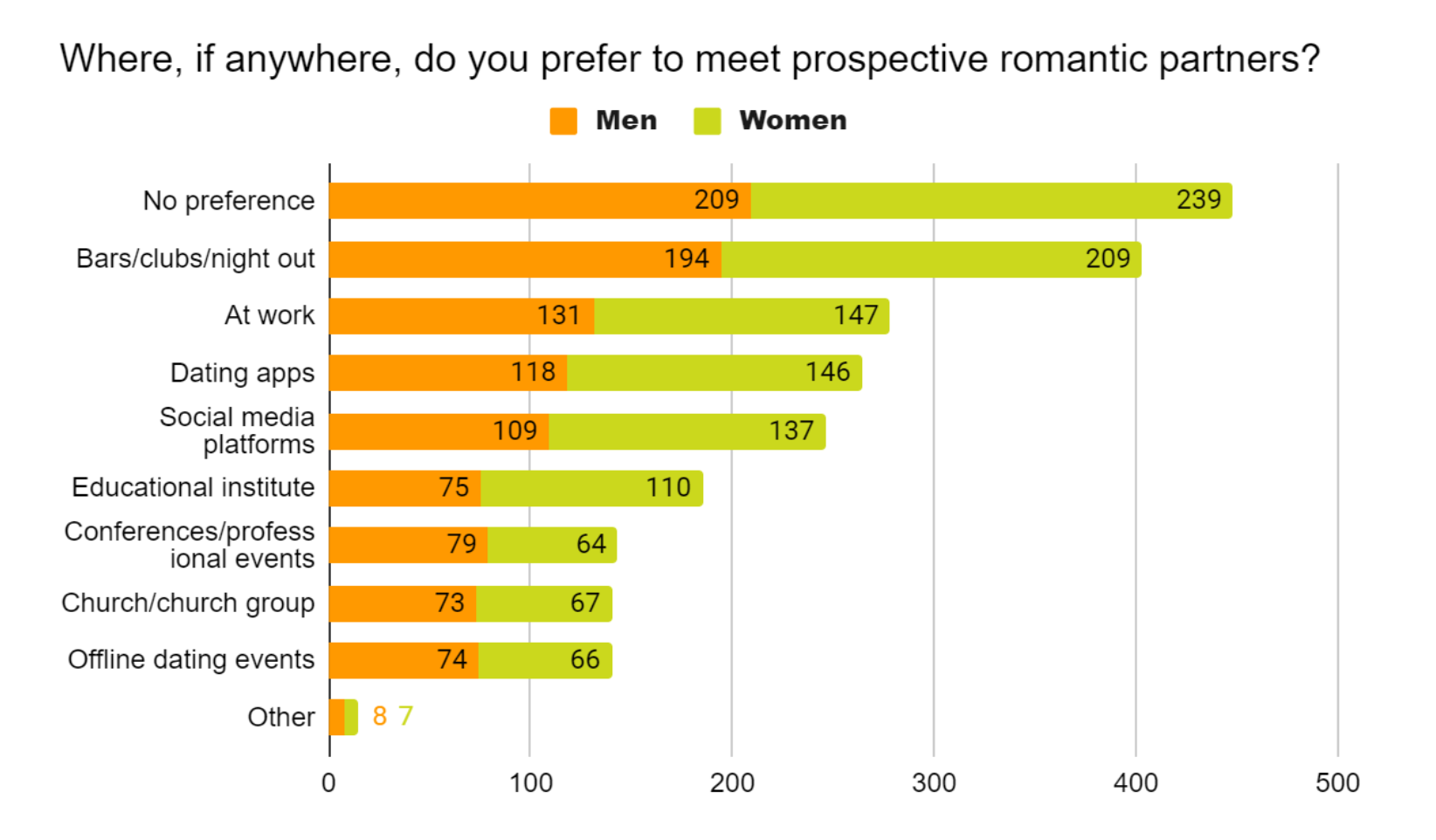 The number of dating apps is constantly growing, and new contenders are adding in fancy gimmicks all the time to make themselves stand out and hopefully receive traction in the market of hopeful singles. Take the dating app Thursday; only allowing you to talk to matches 1 day a week, or Bumble’s key feature where women have to make the first move when messaging new matches.

And we can now definitively announce that the most popular dating app in the UK in 2021 is… drumroll please… Tinder! Hmm not much of a revelation, really. I guess the OG of dating apps is still yet to be otherthrown! 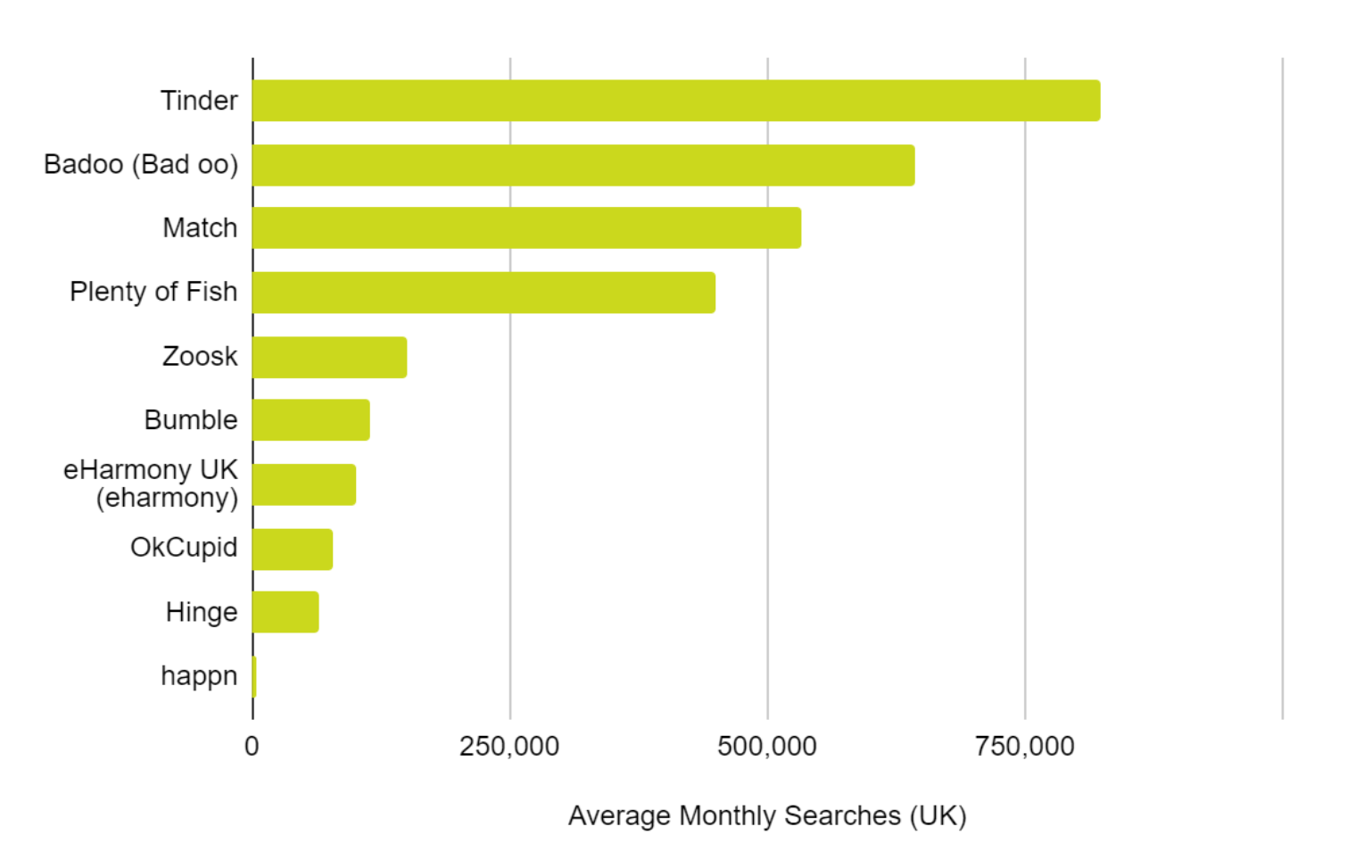 Doesn't look like anyone's going to be beating out Tinder anytime soon, that's for sure!

Which Cities are Most Up for Finding Prospective Partners Online?

When it comes to finding romance online, we’ve rounded up the top 10 cities in the UK that are most up for meeting their prospective dates through the internet, whether via dating apps or social media:

Take a Look at the Top 10 UK Cities who are Most Interested in Online Dating:

This data was obtained by recording the percentages of responses preferring dating apps and social media as separate dating methods, and adding together these percentages to give an idea of the popularity of dating online in each UK city.

Dating Statistics and Industry Trends in the UK in 2021

While putting together this data, we also did a little digging to find a few fun facts about the UK’s online dating scene and the market that surrounds it.

We found out that:

But once you’ve swerved the catfish and gotten through those seriously awkward first encounters, either meeting someone on Tinder, at the local nightclub, or even at the office, you'll soon discover that dating in the modern age is anything but boring and there's a massive pool of singles out there. Sure, you might have some spectacularly terrible dates but at least a dating disaster always makes for a great story!

So whether you've dived head first into a relationship, are tentatively dipping your toe in the unknown waters of your local dating scene, or you're simply admiring a crush from afar with no idea how to make the first move, why not put your phone down and send a love note from our collection of romantic cards instead!