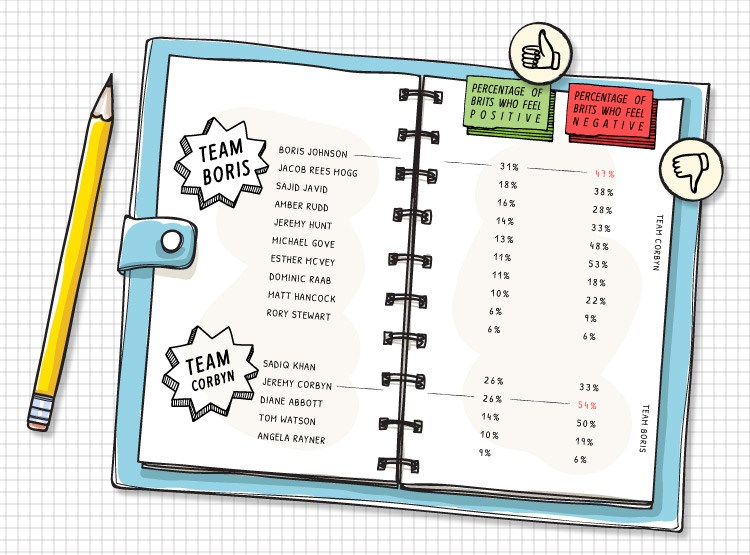 Remember that guy who said we’re on a hamster wheel of doom? Hello new prime minister!

That’s right, with a messy leadership contest finally over and Boris at last in the hot seat (no-one saw that coming right?), all we can say is that we’re happy Teresa’s finally got some time on her hands to run through those wheat fields J. Still, with Hunt likely low-key raging, Corbyn seemingly bracing for a smackdown and Brexit chaos continuing as cabinet members resign all over Twitter, we thought we should enter the ‘are we completely screwed?’ debate to find out whether things are as cool as Boris would like us to believe in his first speech as PM, or whether we should have rolled out the office, joined forces with Green Peace and tried to block his way into government using our new supersized cards as roadblocks 🙂

Disclaimer: Yes, that was us trying to advertise our new supersized cards, and yes, we’re annoyed that we didn’t think of it as a guerrilla marketing initiative sooner 😆

So, seeing as we are some of the 70% who agree that the more they hear about Brexit, the more overwhelming it gets as well as the 83% who are fed up of seeing Brexit in the news every day, we went looking for the hard facts and in the most un-scribbler like of fashions, turned to YouGov to help with our quest.

Here’s what we found (in no particular order):

Could it get any more most ridiculous that the date in which all of our futures may well be decided and those of our children, and our children’s children and so on (cue Doctor evil laugh), is set for what is otherwise intended as the most terrifying day of the year?

Jokes apart… regarding the person we’d all have liked to take us into whatever battle it is which we face with the EU, turns out that 41% of people would have chosen Jeremy Hunt, with only 29% choosing Boris! If that isn’t reassuring, what is?! One-third of us also say that we haven’t got a clue which, let’s face it, isn’t that surprising all things considered.

Perhaps what is a little more disturbing is that 70% of us no longer feel there’s a political party that speaks for us, and over half think that the current political system is fundamentally broken. Grrreeeeeeeat!

When it comes to the rest of our politicians, turns out we’re even more “Meh”. Sajid Javid from Boris’s new crew/cabinet is seemingly the number one guy when it comes to us being completely indifferent about a politician, with almost 30% of people feeling underwhelmed by him 😱. In fact, when it comes to shoulder shrugs 🤷, Amber Rudd, Jeremy Hunt and Mike Gove are ALL up there when it comes to how they manage our expectations. Meanwhile, in the labour camp, in spite of all the anti-Semitism issues taking us back to a pre-war period – somehow Team Corbyn appears to have got off lightly! Confused? So are we!

In terms of how we really feel about our politicians, i.e. whether they ‘make us happy (positive) or sad (negative)’, a statistic which couldn’t get any simpler or more British if it tried, it’s good to see that our new PM appears to ignite as many conflicting feelings as US President Donald Trump, with only 22% of Brits trusting him and 47% of people becoming unhappy when they think about him 😭 while others consider him to be charismatic and intelligent.

With a predisposition to write newspaper columns like the one in the Telegraph titled ‘Face It, It’s All Your Own Fat Fault’ (about obesity!), get stuck on zip-wires and get the most important statistic of his leave campaign wrong, (something it proved difficult to conceal when printed on the side of a double-decker bus!) we’re sure the real Boris story is only just beginning.

A source of endless fascination, eccentric Jacob Rees Mogg, with his suits and impossibly posh named children, could easily be considered a shoo-in for the next Bond villain. A huge fave among Baby Boomers, we know mum and dad love him to death, but perhaps in part because of his suggestion that council workers should wear bowler hats, is unpopular with 38% of people!

Sajid Javid has to be one of our most confusing cabinet politicians. More people feel neutral about him than anyone else. 16% of the public feel good vibes vs 28% who don’t while the majority are non-committal at 29%.

For a man who spends a lot of time on the cover of Vogue and hanging out with Naomi Campbell, Labour’s Sadiq Khan would appear to have a fairly equal share of likes and dislikes (one of them being Trump!)

As the leader of the official opposition to the Conservative party, Jeremy Corbyn is bound to ignite feelings of angst and adoration amongst us. It turns out 54% of people have negative feelings towards him, which is a 7-point lead on Boris! Are we surprised? Who knows anymore. He’s been accused of sharing fake news, ignoring the antisemitism row within his party as well as asking for a general election more than anyone else in history…and of course, there is always Traingate.

So, there you are, a who’s who at the core of current British politics and an overview of how the public feels about them.

Luckily…most of us (around 67% of Brits) say they can and are friends with someone who has a different political view. No matter who your mates or family support, you can always make them smile and show them some love with one of our ridiculous Scribbler cards!