To find out, we dive deep into the world of new jobs and employee retention, discovering everything there is to know about what we think of our jobs and bosses in 2021 and which parts of the UK are most eager for a change in career.

New Job Statistics: The Run Down

Want to find out the latest facts and figures on the topic of career changes in the UK but don’t have time to scroll all the way through? Don’t worry! We’ve summed up our key findings:

How Many People in the UK Hate Their Bosses in 2021?

We conducted a survey using Censuswide to ask 2,000 UK adults to complete the following sentence: “My Boss Is…”

This provided us with a variety of interesting responses ranging from very positive to very negative - and everything in between! The survey found that: 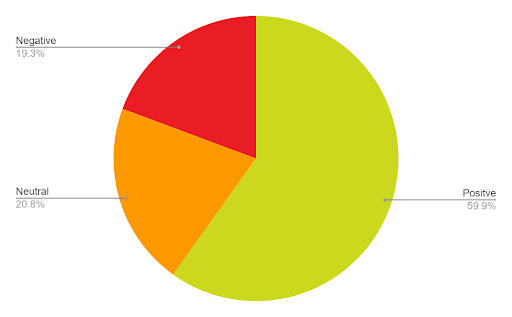 Categorised survey responses to the open ended question: “My Boss Is…”.

What Do We Say About Our Bosses Behind Their Backs?

It's not just post-it notes that say "kick me", oh no... Our survey found that disgruntled employees in the UK really don’t pull any punches when it comes to their bosses! The following chart shows which words we use most frequently when describing our bosses in a negative way. (If my boss is reading this then I'm sorry, I only called you a prat once!) 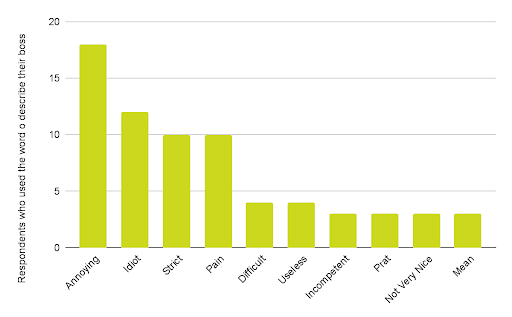 Many of the most commonly used negative descriptions were based on a bosses ability to perform their job and manage their staff effectively. These included terms such as ‘useless’, ‘difficult’ and ‘non-existent’.

However, a large proportion of responses were more like insults, focusing on the personality of the individual as opposed to their capabilities as employers or managers. Terms such as ‘annoying’, ‘mean’, rude’ and ‘inconsiderate’ were used frequently, suggesting that many boss-employee quarms could be predominantly interpersonal in nature.

Yes, they do exist! To all the managers and bosses out there - don’t fret - some of your employees do have positive things to say about you! 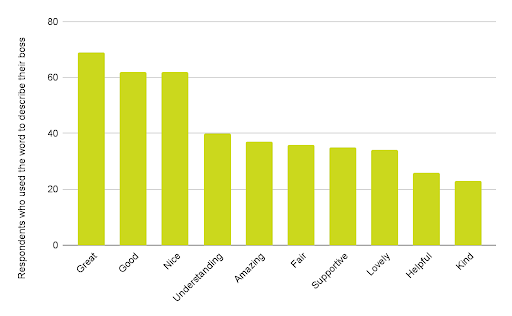 The positive responses were most commonly based on both how pleasant an employee felt their boss was both in general and in the workplace.

In terms of neutral responses, the overwhelming majority used the word “ok” to describe their bosses, with 53 people describing their boss in this way… at least it could be worse, eh?

The *Best* Things People Say About Their Bosses

Some of the ways people described their bosses in our survey were too funny not to mention, so we thought we’d list a few of our personal favourites for your enjoyment! When asked to complete the sentence “My boss is…”, we received the following brilliant responses:

Hot For Our Bosses

We noticed that many of the responses were also based on looks or involved sexuality, with notable comments being “My boss is sexy”, “My boss is cute”, “My boss is a sexy little minx” and “My boss is very handsome and good looking”. Whilst the intention behind these comments is unknown, these responses appear to focus solely on looks rather than their boss’ personality, behavior or professional relationship with themselves.

How Many People in the UK are Looking For a New Job?

So, with 1 in 5 UK adults not having anything nice to say about their bosses, we wondered how many workers are thinking of jumping ship and setting sail in a new direction. To find out, we conducted a keyword analysis using the tool Keyword Finder. Our analysis found that:

Are job satisfaction rates higher in the big cities? Or are those based in more rural locations happiest with their jobs? To find out, we used Keyword Finder to analyse average monthly searches in each major town and city in England to discover where people are most likely to search for a new job in their area.

The 10 cities and towns which search for the term ‘Jobs near me’ most frequently are as follows:

Average proportion of online searches for the term ‘Jobs near me’

*It’s important to note that some people may have searched for the term more than once, therefore not every search equates to a different individual in the area. Therefore this figure is just an estimate.

The Top Reasons Why People Quit Their Jobs in 2021

To find out a little more about what motivates UK adults to quit their jobs, we conducted another survey using Censuswide in July 2021, asking 2,000 UK adults:

Which of the following would cause you to resign from your job? (Tick all that apply)

Our survey found that: 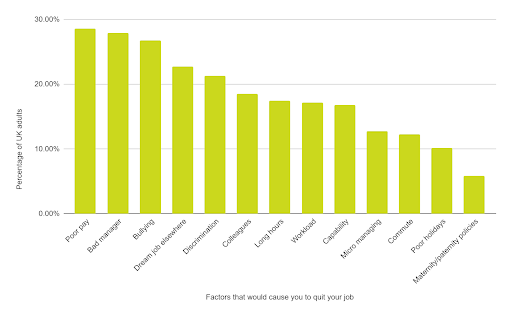 Top reasons that would cause people to quit their jobs

Some other main factors that would cause people to quit their job are:

Other reasons included feeling incapable of doing their job (17%), being micromanaged (12.5%), the commute (12%), poor holiday allowance (10%) and poor maternity and paternity policies (6%).

How Does Gender Affect How Likely We Are to Quit Our Jobs?

Does gender impact the likelihood of certain factors causing us to quit our jobs? Or are we all as likely as each other to quit due to the above reasons? To find out, we analysed men’s and women’s responses to our survey and found that:

Our survey found that 1 in every 5 Brits are really not fans of their bosses, describing them as being “annoying”, “mean” and simply - “useless”! Also, poor pay, bad management and bullying were cited as the main reasons why UK adults would resign from their jobs, with men being less likely to leave their jobs on the whole than women, particularly when it comes to issues such as bullying and discrimination.

Our investigation also indicated that job satisfaction levels may be lower in areas such as Walsall and Dudley, as more people search for the term ‘Jobs near me’ in these areas than any other parts of the country.

So, what would it take for you to up and leave your job? For those that are brave enough to take the plunge, browse our brilliant selection of Leaving and New Job cards!