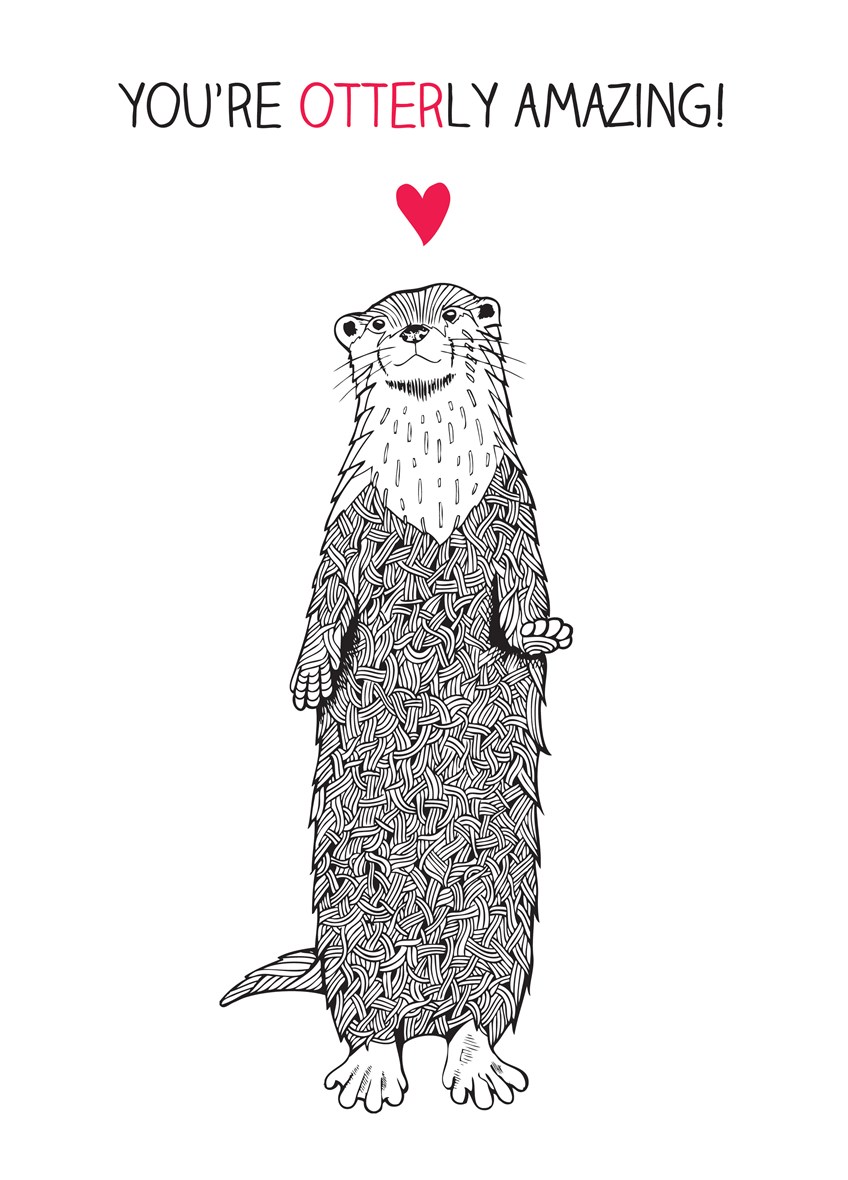 In honour of International Women’s Day, we’re celebrating the wonderful work by our female designers. This time it’s Clare from ComPONY. Clare graduated with a degree in Illustration in 2013 and since then has developed a unique style using fine liners and inks, creating a quirky range of greetings cards. Clare is brand new to Scribbler and we couldn’t wait to interview her.

Hi Clare, thank you for taking the time to talk. I’ve spent quite a while looking at your new designs on our website and I love them. You have a very distinctive style, you’re quite different from everybody else, what has inspired your work?

That’s a good question! I’ve always worked with pen and I suppose back in the day, I was very into realistic painting, which was very A-level! I started to look at people who were successful online and I wanted to keep it realistic but stylised with patterns. It sounds a bit poncy but I used to be into Art Deco painting, like Alphonse Mucha and the funky line work comes from that. That sounds a bit arty farty! The cards predominantly came from when I just finished uni, I thought I’d do a few Christmas cards and I think there was a weird mush of my personality, I wanted to do editorial stuff but it just didn’t suit me as a person. I’m just super silly and I managed to get across my personality of sarcastic-ness and crude humour, so it's a mush of that!

That’s quite a good mix of styles there, you started with Christmas cards, how long have you been designing cards?

That was, erm… 2013. The Christmas of 2013, which was ages ago now! I did my first one, which was Jesus holding a cat, it was inspired by my sister’s boyfriend who also loves cats. It says ‘O come all ye furful’ and I did it for him and put it online and people really liked it. I thought 'is there a way I could make money out of actually being creative?'.

What paths did you take to get to the stage you’re at right now?

Etsy has been a huge confidence booster, without Etsy I don’t think I would even be talking to you right now. It’s very personal and people are very nice on there. I worked really hard on my Etsy shop, some people don’t like it and prefer trade shows. But I like the nitty gritty of how SEO works and all that, which is quite difficult! I was kind of lucky when I first quit my job and I had a few Buzzfeed features and it boosted my page. I did my first trade show last year, it’s still quite fresh really, but it’s been baby steps really. And then I met Scribbler and I literally just wanted Scribbler, I just knew we would work well together.

They’re perfect for our site to be honest! We’re celebrating international women’s day, are there any women who have inspired you in your work?

Oohh yes! I suppose back in the day, I was really inspired by Sandra Dieckmanm, and what inspired me was that she had a really good online store and it’s all cards and ‘making it yourself’. There’s just so many! I’m a big fan of Emily McDowell, she’s pretty good. It’s very emotion stuff those cards, she’s pretty boss in the card industry. Gemma Correll is another one!

What piece of advice would you give to other women who want to become a designer?

I was literally talking about this yesterday. I know there’s a lot of female illustrators and designs, but I just find that when women are in business, if they are assertive, they’re seen as a bit threatening. It’s a bit of an outdated look and people aren’t used to it but it’s like that in every industry, predominantly people at the top are mainly men. Being assertive is really important, I’m still working on it as we speak! You end up lapsing into being this ooh yes, yes type of person, it drives me mad. Even just writing emails, the way you write it is the difference between how a man would write it. It ends up being more direct than how a woman would write it. I feel like that’s quite a common theme in general work life. I’d say be brash, be assertive! I worked with a man not too long ago, and wondered if he would treat me that same if I were a man? We’re not in the seventies any more, damn it! I’m pretty fiery about that.

I read that you draw by hand firstly using fineliner and inks and work on them digitally. How do you go about that?

I draw everything by hand and I scan it in. My cock one (I Willy Love You) took me about 3 hours, which is pretty bonkers. I scan it in and then use Photoshop to smooth any rough edges. I use the same font every time and follow a general rule, black line and then usually one other colour. It’s two or three colours max.

What’s your favourite card from your Scribbler range?

Erm, weirdly, it’s not my favourite style, but I spent ages trying to get the shape right on the willy one… my brainstorming for that was mad! On a personal level, the baby lumps one, I wanted to portray this kind of fresh mum, who’s looking a bit bad ass! So, that’s probably my favourite one. I like strong independent women, I’ve got a few friends who turned into different creatures when they became mums! The Godzilla one is very relatable, brides just going insane! That came off the back of doing some wedding invites for a girl and she sent me two A4 sheets of how these bloody invites would look. I said 'I can’t do 50 edits that’s going to cost way too much', and I was just starting out and was like 'yeah that’s fine', but it ended up taking up way too much of my time and got a bit heated! So never doing that again… but that’s what inspired that card! My cards are so sarcastic!

It’s been an absolute pleasure to interview you, Clare. Thank you ever so much!

You can find all of ComPONY's cards here, take a look, they’re brilliant.