How did you get into designing cards?

By accident really. Lee was a creative copywriter in a former life, and he was looking about for a funny card and just couldn’t find much that suited his weird, really quite dark sense of humour. So he thought he would just come up with some that he found funny, and if anyone else liked them, cool. They did, and thus the whole thing got out of hand and now we’re both doing it full time. If we’d worked harder at school, this could have been avoided, and we could have earned way more money, but we might have to wear proper trousers, and that just won’t do. 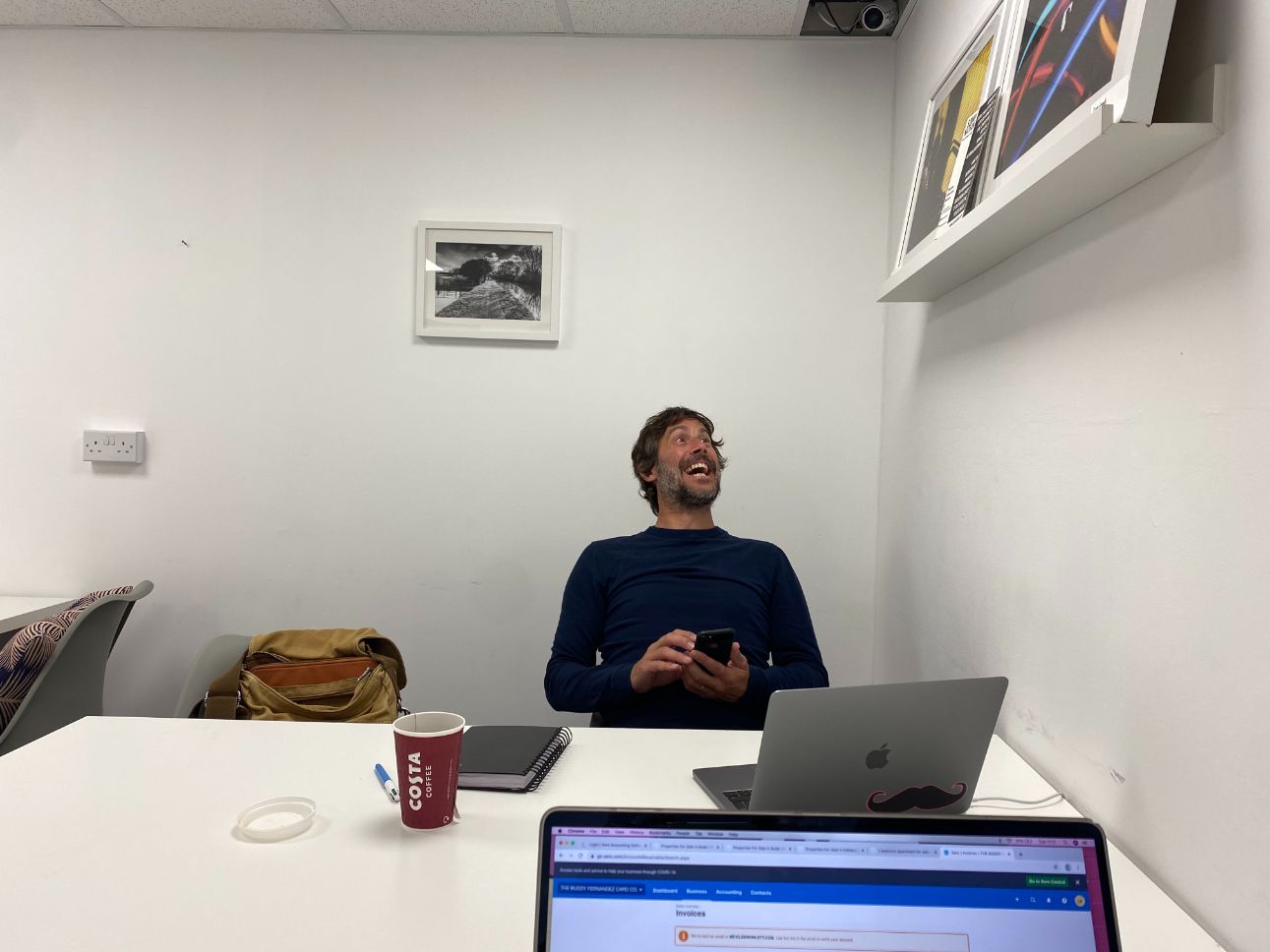 What inspires your work, are you as outrageous in real life?

In private conversations we have in the office, yep, we are horrendous. In polite company, we’re nice boys really. Kind of. In terms of inspiration, it’s really our grounding in Eastern philosophy, Latin, and post-war Belgian street poetry that informs our work. Hence designs such as ‘I’ve seen your fanny’ and ‘This was all they left at the garage’. Deep, yes, but also highly accessible to the lay person, and very much a considered commentary on the troubling times we live in.

Nah, that’s bollocks... we just look at all the self-righteous, schmaltzy crap people put on cards, and on posts, shake our heads and get a bit judgy, then just write stuff that’s honest, and hopefully funny. We don’t take ourselves too seriously (how could we, look at us), and we try to keep that honesty and straight-talking in the cards. 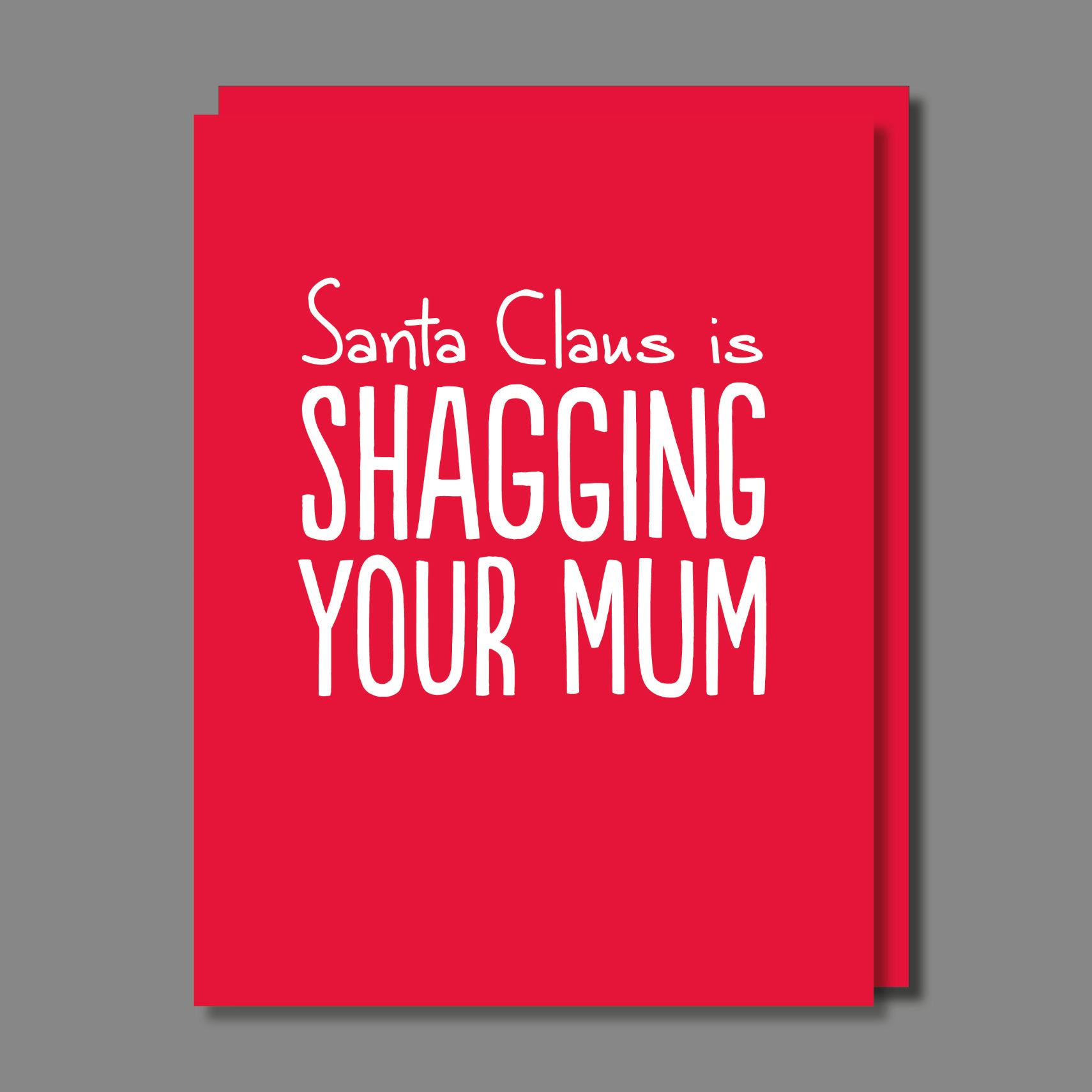 What is your working process?

Initially, it was the pub. On a Thursday night we’d slip down a couple of lager tops and come up with some truly horrific lines. Then, in the morning, we’d realise we couldn’t possibly say 98% of what we’d written or we’d be looking at 3-5 in Broadmoor, and hone the other 2% into something quite funny and not too troubling.

Nowadays, we have a proper office and everything. With a dog and a microwave, so we’re basically the same as JP Morgan. It’s very high-end. I mean it isn’t, it’s out the back of a lovely shop in Leighton Buzzard, and it works great for us. It means Lee can get on with doing the shiny things and crafting the sentiments we come up with into cards, and Wes can do what he loves to do the most: talk to people. To customers, potential customers, and occasionally a man who tries to talk to him about an accident he was supposedly involved in. He likes playing with that guy; annoying him until he hangs up.

But in essence, we still come up with loads of ideas, then hone them into what we can use. Then we try to get lovely people like Scribbler to buy them and sell them to all those lucky, lucky punters.

Everything we do is print-on-demand now, so we just send the orders straight to the studio and then it all gets done and out the door the same or next day (as of very recently). 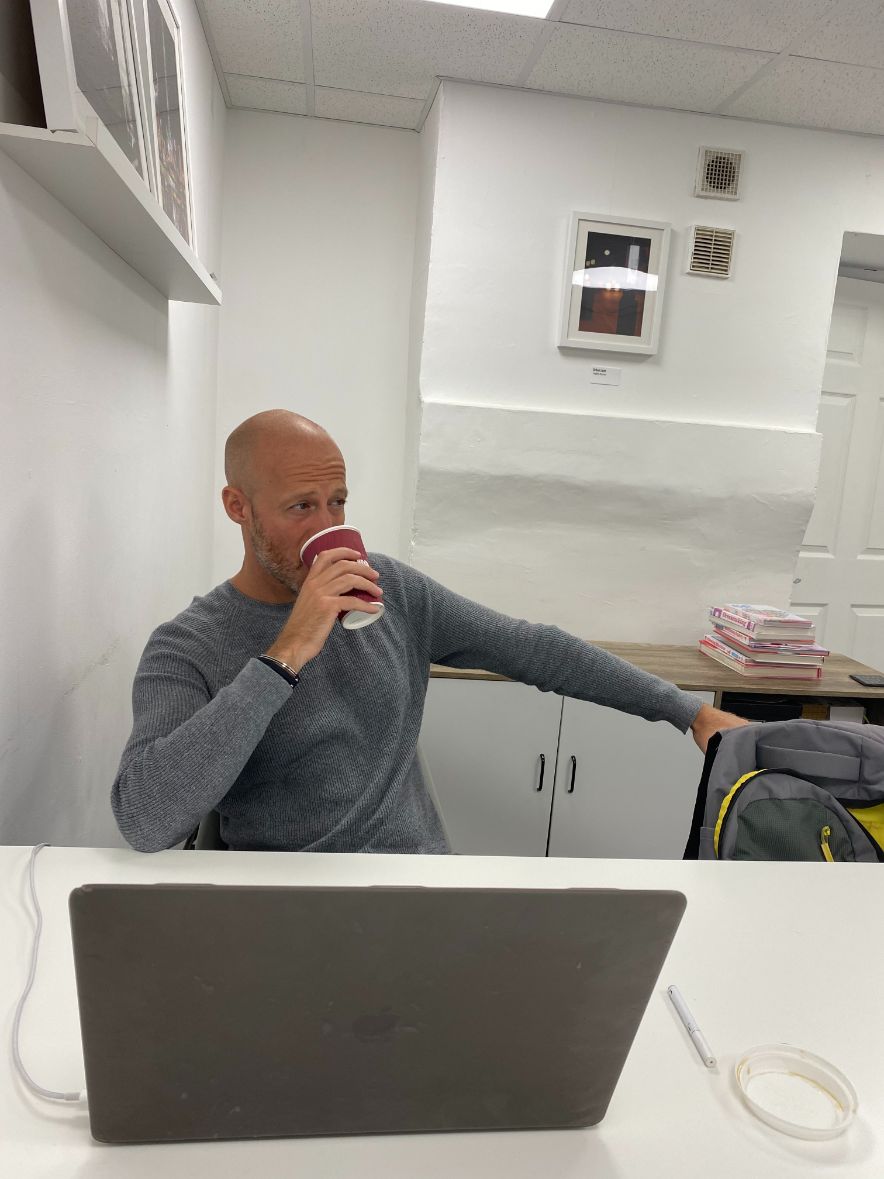 Did or has lockdown changed how you work?

During lockdown, it was a nightmare really. We haven’t done that much online until recently, so without the shops open, it all went very quiet. When things picked up, we didn’t have access to our usual print on demand crew, as their studio was closed or was on skeleton staff. When restrictions were eased, things were still tricky, with local lockdowns and ongoing studio staff shortages, but we’ve found a new solution now, so everything is getting back to being even quicker than before. Which is handy.
But lockdown made us focus more on online sales, and try to make more of our social media. We have a new person in, Charlotte, who handles that for us. She’s a young person, so she understands what the hell is going on, and actually likes it. We’re old and we hate it, so having her is a big help.
It also gave us time to think about where we want Buddy to go in the future, plan some new designs and ranges, and generally get more on top of things now that Wes is full-time too. 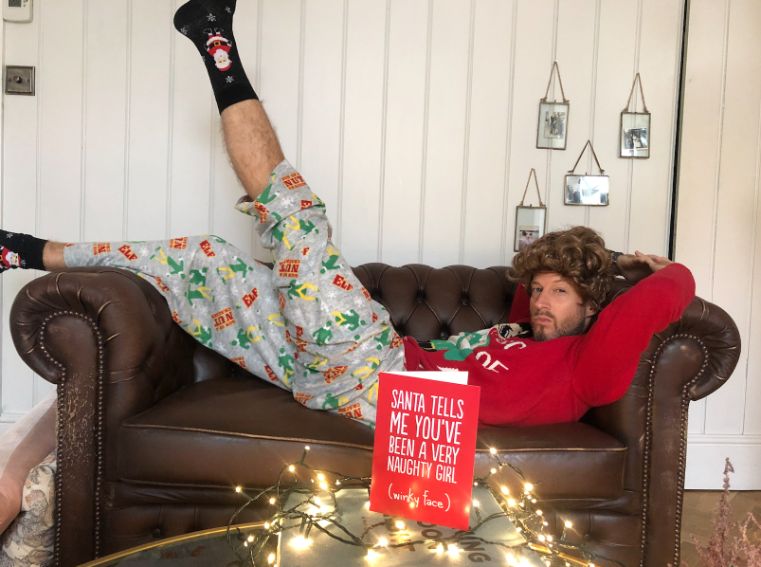 What are you asking for for Christmas?

Same as every year: pants. And socks. And a boxset of Bergerac in HD. Imagine Nettles’ glorious tanned leather jacket in that kind of definition, flapping in the breeze as he bombs around Jersey solving crime. Seriously though, socks and pants for Christmas are imperative for any man. One year without them and things can get very dark, very quickly in a man’s undergarment draw. Doesn’t bear thinking about.

Wes would also like some lavender bath oil (don’t ask). Oh, and a COVID vaccine. That would be pretty handy. (Wes and Lee, Christmas has come early - the vaccine comment was made prior to the fab news this week - wahoo!) 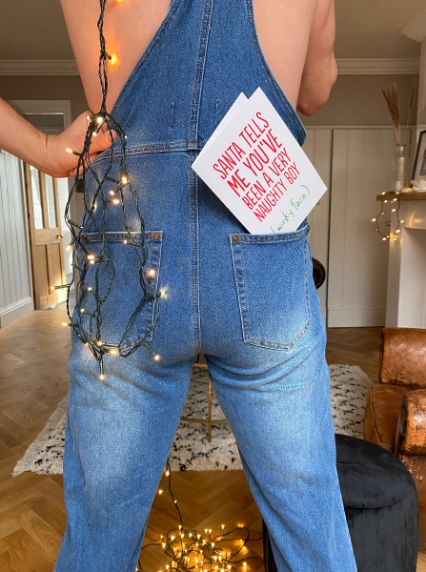 Only just got into Ozark. So good. Bit murdery, but top drawer. Wes is bang into Cocaine Coast. He’s been taking notes. In another life, he’d have been a cracking drug lord. Like a nice one, not full Pablo, but he would have gained a lot of weight, had a lot of gold things crafted in his image, probably bought a tiger, and they’d have almost definitely both worn smoking jackets around the mansion.
I also just started Ratchet, on Netflix. That shit is dark. 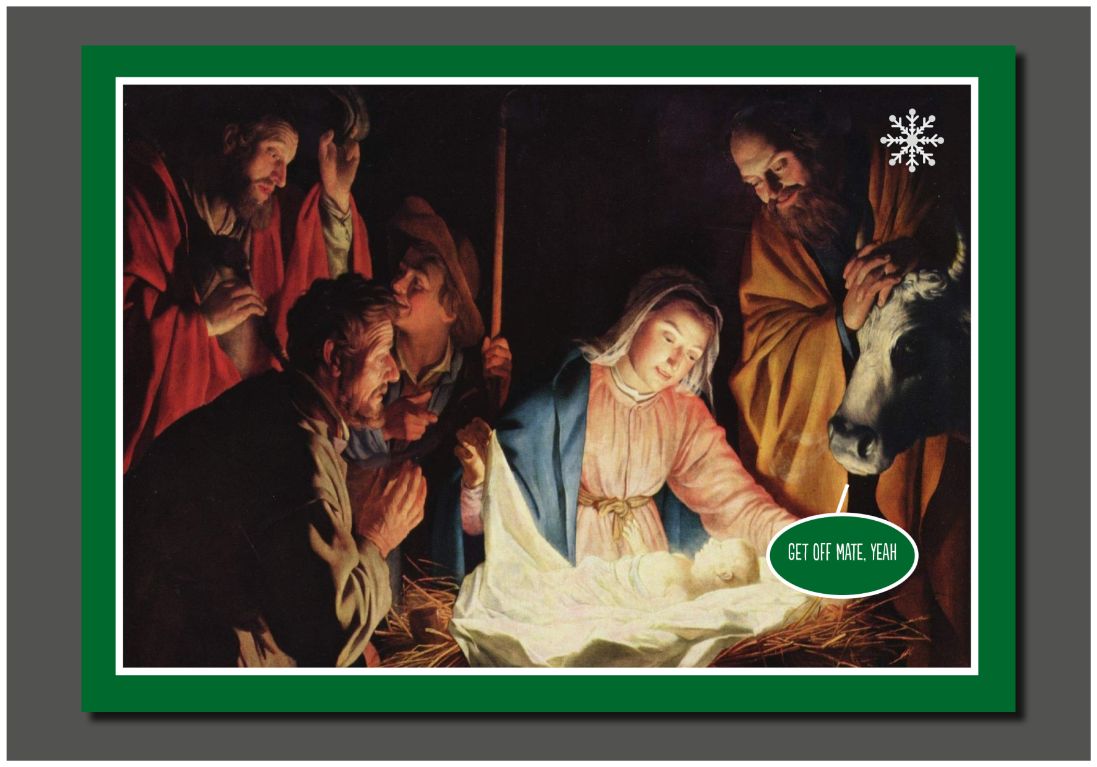 Which is your current favourite of your own Xmas designs?

Wes loves the new Naughtivity ones. The one with the cow saying ‘Get off yeah’ is his personal favourite. Lee still loves ‘Santa is shagging your mum’, because he’s a very, very basic man. Lee likes the Naughtivity ones too though. We got to do pictures for a change, which was nice.

What is one fun fact you would want people to know about you?

Fun fact about Lee... hmmmm... not much, although his Dad did once sell a Mondeo to Wolf from Gladiators. One for the kids there.
A fun fact about Wes is that he really hates fun facts.

Thanks to Wes and Lee for taking part, some of our favourite photos to date we think...Shop the full Buddy Fernandez range here. Have a fab Christmas one n all!