Please be aware of possible delivery delays due to Royal Mail strikes from 30th Sep - 1st Oct
Wow! Get 4 Standard Cards for £9.99
Get 20% bonus credit with any purchase of Prepay

From the ones we can (mostly) get away with in front of the in-laws such as Crap and Damn, right through to the slightly riskier, F-bomb and even the controversial C-word... No, not Christmas, the other one! Us Brits have a real passion for our crude, vulgar, suggestive and frankly, down-right offensive swear words. But which of these is our all-time favourite swear word of them all?

How Common is Swearing in the UK?

Here at Scribbler, we consider ourselves experts when it comes to rude words and gestures, particularly when they feature on somewhat cheeky greetings cards! But just how many Brits share our love of inappropriate insults and potty-mouthed profanities?

To find out, we questioned 2,000 UK adults about their love (or hatred) of taboo terms.

Our survey found that: 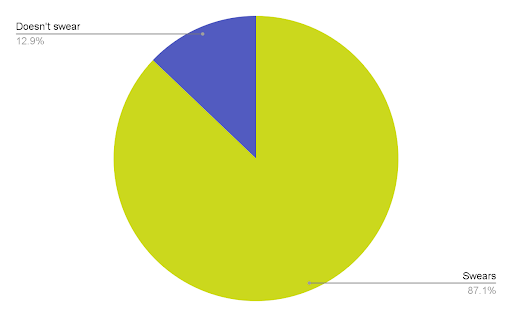 Proportion of UK adults surveyed who have a favourite swear word vs those who don’t.

To find out which rude words we love the most, we asked 2,000 members of the wonderful UK public (all aged 18 and over, of course, what do you take us for?) ‘What's your favourite swear word? (Tick up to 5)’ and provided them with the following list of options: 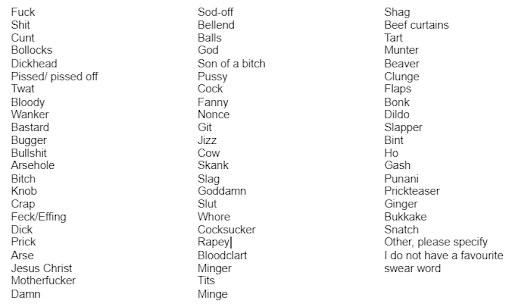 Also in the top 10 were B*llocks, D*ckhead, P*ssed/P*ssed off, Tw*t, Bloody, W*nker and B*stard as shown in the graph below.

Interestingly, some of our favourite swear words, such as F*ck and C*nt happen to be those that are often categorised as being amongst the strongest swear words. But why is this? To find out, we consulted the help of Dr Karyn Stapleton, Senior Lecturer in Interpersonal Communication at Ulster University.

“My research colleague, Kristy Beers Fägersten has identified something called the Swearing Paradox, which states that offensiveness of swearing is directly related to frequency of use. So the more offensive swear words (such as the f*ck, c*nt and sh*t) might be expected to also be the most frequently used.

“This concept also fits with my more general explanation, in which the distinctive effects of swearing (positive as well as negative) are directly related to its potential to shock or cause offence.”

Which is the UK's Sweariest City?

Our survey revealed that the UK city that swears the most* is… Bristol!

So now we know Bristolians have the biggest potty mouths of us all.. But which UK region swears the most?

Our survey found that the sweariest region in the UK is… London! Where three quarters of adults have a favourite swear word.

This is then followed by the North East, Wales and Scotland. 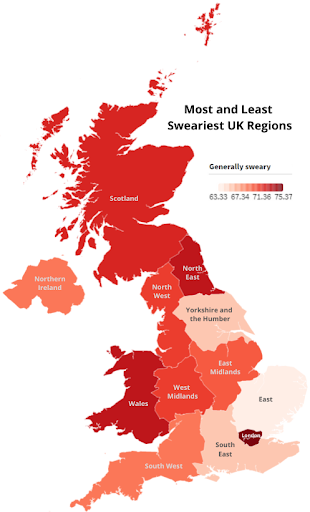 UK regions who swear the most (red) vs those who swear the least (white), based on the proportion of people who say they have a favourite swear word.

The least sweary regions on the other hand are the East of England, the South East, Yorkshire and the Humber and Northern Ireland!

It’s quite clear that people all over the UK enjoy a bit of foul language at least once in a while. But which swear words are most popular where?

The table below shows the UK’s favourite 21 swear words along with the city in which they’re most popular.

The Most Googled Swear Word Of 2021

Swear words can be used for all kinds of different reasons when they come up in spoken language. But just how many swear words do we type into Google? And why?

Well, bear with us because this is where things get a little too... real.

Our online search analysis found that:

The most Googled swear words in the UK in 2021

To conduct these analyses, we used the search analysis tool Keyword Finder, but to be honest - we kind of wish we hadn’t looked so much into it!

So Why Do We Swear So Much As A Nation?

“Swearing is closely associated with both emotion and offensiveness,” says Dr. Karyn Stapleton. “These features make it very powerful, linguistically and psychologically, and mean that it can be used for many different purposes. One of its common uses (and the one that people probably think of most readily) is to express negative feelings such as frustration, anger, aggression, and pain - and swearing has even been shown, in experiments, to act as a form of pain relief or as a way of managing/withstanding pain.

“However, in everyday and conversational use, swearing is used for a much wider range of activities than we might first think. Research in psychology, linguistics and communication has shown that it is commonly used for things such as - group bonding and solidarity, resisting authority, expressing identity, showing trust, emphasising points, enlivening narratives, gaining and maintaining attention, expressing positive emotions such as excitement or joy, attempting to put others at ease, creating humour, and showing appreciation.

“Of course, swearing is always a risky linguistic/social behaviour, as it can easily cause offence if used in the wrong context or relational setting - but it seems that this is actually what gives it its power and versatility. Successfully balancing the risk of offence with other aspects of the context, culture and interaction can produce effects that are not easily achieved by other forms of language. This is a main reason that swearing is used so widely and by so many different speakers.”

Whatever sentiment you're expressing, if you love colourful language as much as we do, why not check out our rudest cards!